What’s So Funny About Corporate Training? 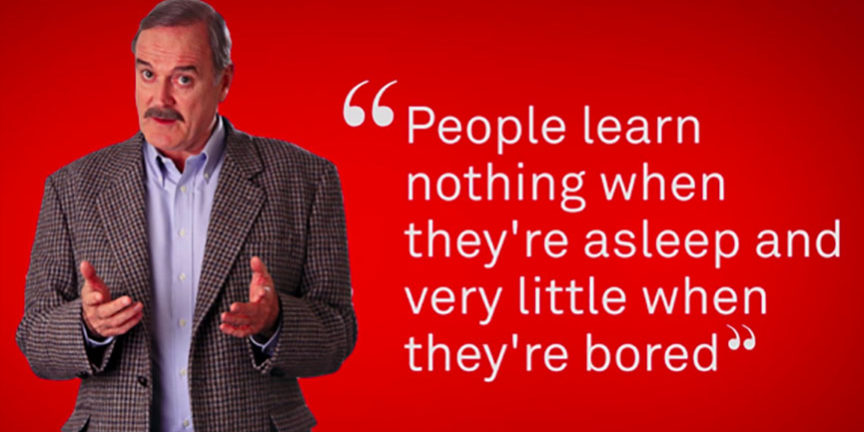 In 1972 a well-known comic actor decided to dabble in soft skill training for the corporate sector by producing videos and, much later, e-learning courses and learning platforms. The company is called “Video Arts” and the comic actor was none other than John Cleese. Cleese sold his share in the 1990s; however, he still continued to feature in Video Arts’ products and their success has been phenomenal. Very few people haven’t viewed these videos as part of some sort of business training course.

This is the most famous and well known example of an actor utilizing their acting and comic skills to teach people about workplace performance. Alan Alda is another famous actor that has added his mark to the world of corporate training with his own company, “Alda Communication Training”. It’s not a new concept though, as actors have been employed in this field for decades, if not centuries. Think King George VI of “The Kings Speech” in the 1930s as a prime example. So why get an actor in to teach some soft skills? As Mr. Cleese himself said:

Apart from the entertainment factor, there are a host of other skills that actors learn as a part of their trade that translate perfectly into interpersonal, communication and presentation skills. Acting is, after all, the study of human behavior:

The bread and butter of an actor’s tool kit is fundamentally communication. Utilizing everything you have to get your message across clearly and concisely.

Fifty-five percent of communication is body language, according to Mehrabian’s famous 1970’s study. Although the actual figure is often contested, nobody can deny the importance of body language when it comes to communication. Reading other’s intensions and being able to enhance your own communication style go hand in hand with learning about body language.

Effective leaders are effective communicators and have great interpersonal and presentational skills.

Often teams fall down simply because they aren’t understanding the needs and messages of others in their team. This will improve tenfold with effective communication training.

The fear of public speaking (glossophobia) affects many people and overcoming it is actually fairly straight forward.

There are plenty of products out there that address the above points; however, the main advantage of using corporate actors to deliver this training, is its hands on nature. It’s not just about learning the theory, it’s about getting up on your feet and rehearsing your new skills.

“Tell me and I forget. Teach me and I remember. Involve me and I learn.”

Added to that, training delivered by corporate actors is genuinely entertaining, which is a superb way to engage a group. When you add the interactive element, you’ve got a group of involved and engaged people, which is the perfect way to get your communication message across and working.