Role Play in Business – Why it Doesn’t Really Suck 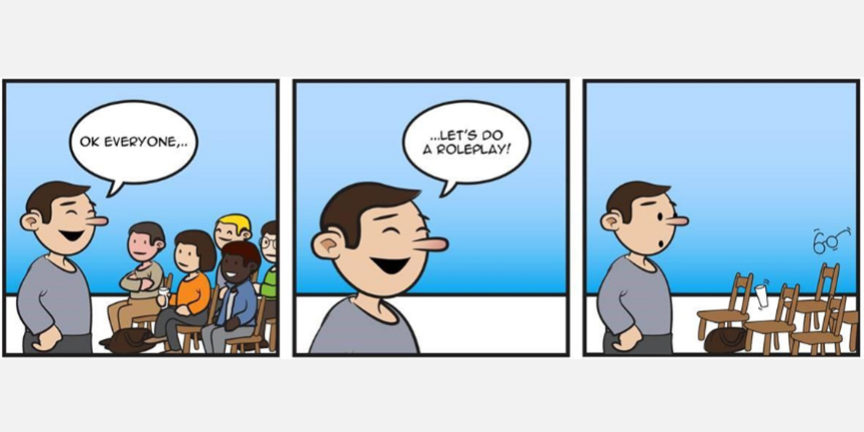 Role play is possibly one of the most controversial methods used in business training for one simple reason. Most people hate it! There are several reasons for this:

Why Try Role Play in Business?

So, taking all this into account why should you even bother trying role play as a business training method? In order to answer that let me ask if you have an interest in a sport, craft or musical instrument? Did you learn how to hit that forehand, play that guitar or knit that jumper by thinking about it. Did you read a compelling case study that gave you the ability to play the trumpet?

Anything we do well in life has come from practicing it, and that’s where role play becomes a powerful teaching tool for anything related to communications. It gives participants a chance to practice with their new communication tools and it becomes a vital part of the learning experience. In fact, I would say that any communications course, be it sales, presentation or interpersonal, without a role-play element, is a waste of time. It is kind of like attending a seminar on tennis, without hitting a ball, and expecting the participants to walk away as better tennis players.

How to Use Role Play in Business

Now let’s get to the meat. We’ve got a proven training method that is almost universally despised and has left most people that have done it permanently scared. So, how do we use it? The answer is simple:

Get someone in that is good at it!

There is a small percent of the population that are not only good at doing role play, they love doing it. They are called “actors”. There is also a special breed of actor that is not only trained in participating in role plays, but in introducing role play to a group of non-actors, getting them involved, enjoying themselves and learning from the experience.

They are called “corporate actors” and this is where a company like Peers and Players can help you. Bring in your case studies, your difficult communication situations, your sales and presentational challenges and these guys will help you dissect them, play with them, work out the best way to approach them and get your participants up practicing them and having fun.

Lisa Peers is the Founder and CEO of Peers and Players. Matt Stewart is a professional actor and project manager at Peers and Players. If you’d like to know more about how corporate actors can enhance your workplace training check out our Role Play training.